This past week was difficult for millions of women around the country.  Many of us listened as the details of a sexual assault that sounds all too familiar were broadcast to the world. We heard a brave woman selflessly tell her story, reliving her pain in front of a national audience.  We heard a privileged man self-righteously deny the accusations, and insist that he is the true victim. For those of us old enough to remember 1991, it was an infuriating case of déjà vu.

When I get angry, I work harder.  The repeated national display of blatant sexism has made me more determined to get elected, and to focus on the brave women and male allies who surround me in this journey to elected office.

Tuesday evening I was at a gathering in Shelburne to celebrate the fifth anniversary of Emerge Vermont, the organization I’ve had the honor of leading for the past three years.  We also celebrated the 85th birthday of the organization’s founder, Governor Madeleine Kunin. Governor Kunin is one of my political mentors (read her endorsement here) and an inspiration to so many women across Vermont.  It was energizing to be surrounded by my Emerge sisters, knowing that we’ve trained and inspired so many Democratic women to run for office in these difficult times.

Thursday afternoon, I turned off my radio and went door-to-door in beautiful Weybridge with my daughter Greta. We talked to voters about local schools, the environment, renovating houses, property taxes, and music.  We basked in the filtered sunshine of a gorgeous late September day in Vermont.  I told Greta about my own experiences, and I tried to honor Christine and other victims of sexual assualt by working harder to get elected. 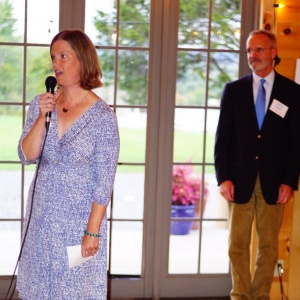 Thursday evening, the Addison County Democratic Committee hosted an event for me and other local candidates at Tourterelle in New Haven. Surrounded by friends new and old, and with my daughter Anya looking on, I talked to the crowd about why I’m running – my family commitment to public service, my experiences as a mother, my desire to meet and help people, and because now more than ever, we need to listen to women.

Saturday, with the help of my Emerge sisters Val and Lauren (and their husbands and dogs too), I knocked on doors in Ferrisburgh. We were taken by the beauty of our county, the views of the mountains, the autumn light reflecting on the still green fields. I stopped at a small yard sale run by a mother and daughter and their neighbor. One woman was a teacher, the other a social worker. They asked me questions about my work on the Mary Hogan School Board and at Planned Parenthood, and my thoughts on combatting the opioid crisis and expanding gun safety reform. One of the women saw me later and raised her fist and said, “Go Ruth! Resist!”

There is no question that now is the time that we as a state and nation need to  elect more Democratic women to office.  We need to elect women like me who stand up for other women – marching for equality, working for access to women’s health care, training women to run for office, mentoring young women and girls to be active in politics, and empowering women to make their voices heard.

I believe Christine Blasey Ford and I still believe Anita Hill. Let’s listen to their stories and honor their bravery by electing Democratic women who will have their backs. I am one of those women. I know their story. I have lived it too. Listen to women.